Here are the pictures of my first Russian Civil War wargame. The White unit had to attack across the open field against the Red town. Luckily for the Whites, it was night time. The White attack line formed up behind a tree line with Terek Cossacks and a MG on their right flank with two squads of 12 men each were on the left. The Cossacks were to charge down the road against a rail road car that the Reds had set up to bock of White supplies. The first white squad was to advance toward the side of the village and rescue a Don Cossack officer who was held hostage. The second squad was to attack the center of the town and support the Cossack assault plus cover the first squad. Here are the pictures, hope you enjoy, thanks for reading. As you will notice, many of the figures need to be based properly. I also hope the uniforms aren't too green. 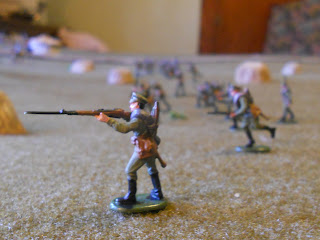 The Whites retreated with their prize. The second squad with the road block set fire to several thatch building to give targets to the MGs and retreated according to schedule. It was a fun game and as always I have decided I need more figures and terrain.
Ben.
Posted by Ben B. at 11:36 AM